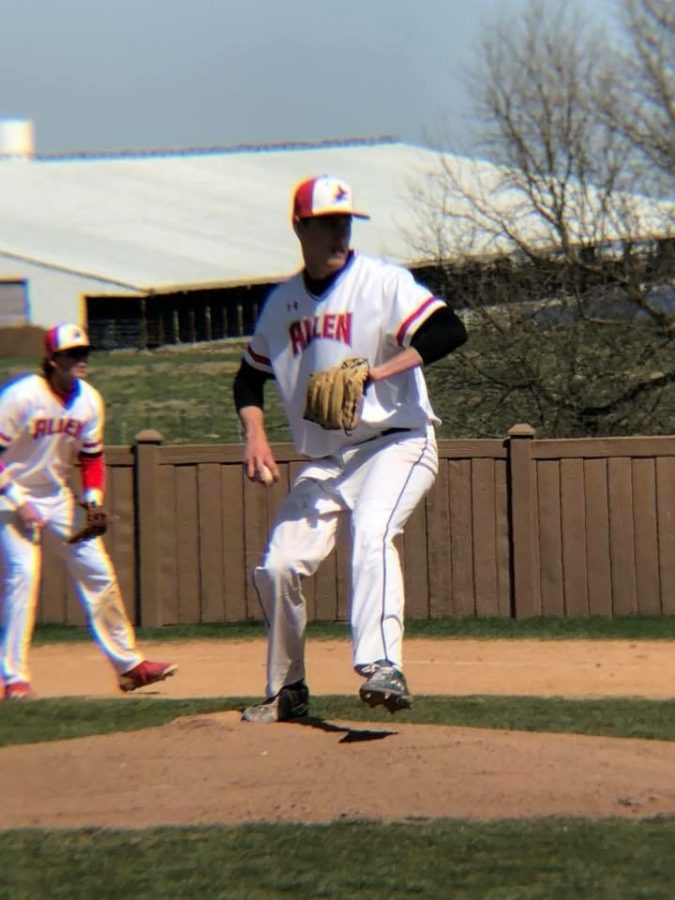 Sophomore Jake Pease, of Indiana, is a pitcher for the Red Devils Baseball Team, and is glad he made the journey to Alllen.

Many students come from far and wide to attend Allen Community College, whether that be only for education, cost efficiency, or to continue doing something they love. Jake Pease, a sophomore at Allen, started his journey to Iola all the way from Fort Wayne, Ind.

For Pease, the journey to Allen was not an easy one. It started in the fall of 2016 as he started to look for schools where he could continue playing baseball. Being from Fort Wayne, he had always wanted to play Division 1 baseball and make a name for himself. Although, with a little advice from his mentor, Ryan Crowley, he thought he needed more development and decided he needed to go somewhere where he could do just that.

Community college was not a bad option, and from there Pease began to look for junior colleges in Florida and other southern states in the United States. He realized competition was elite there, so he began to look for schools in the Midwest closer to home, but none of them caught his eye at the time.

In the winter of 2016, Pease began to worry about not playing at the next level. One night after a basketball game he received a text from former assistant coach at Allen, Levi Meyer. Meyer contacted Pease and asked him about his plans for the fall. They got to know each other,in that conversation, and Meyer invited Pease to the Iola campus to work out in front of the entire coaching staff.

Pease and his family made the ten and a half hour drive to Iola for his visit which consisted of a bullpen session and a tour of the school. The coaching staff liked Pease so much he was offered an athletic scholarship on the spot.

A big decision came into the hands of Pease. He had to leave home and sacrifice only seeing his family on holidays for the game he loved. Pease decided to make these sacrifices and committed to Allen. Today, Pease is a part of the solid pitching staff of the Red Devils Baseball Team and looks to embark on his sophomore season.

“I’m happy I came to Allen,” Pease said. “It was the best decision for me to develop as a baseball player. I’ve also met some of my best friends here at Allen.”