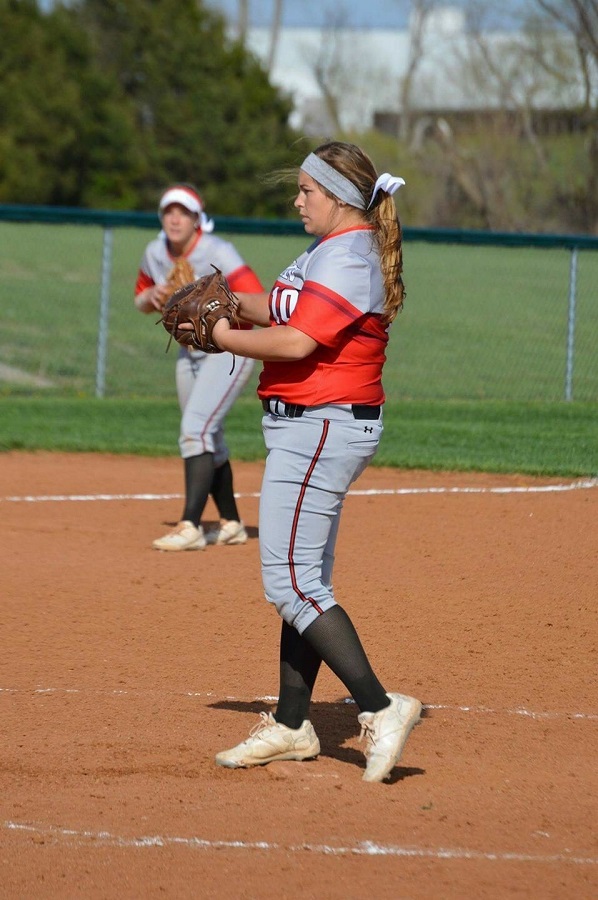 Allen Community College sophomore Raegan Beckley couldn’t be touched in the April 12 game against the Kansas City Community College Blue Devils. She threw 11 innings and struck out six batters. She faced a tough standoff with Blue Devils pitchers and former Red Devil Megan Sumonja, but Beckley was able to come out on top with only one unearned run. It was a hard fought win. With runners on base Beckley was able to close out the 11th inning, lighting a fire for her teammates’ bats to come through with the go-ahead run.

Beckley is a Wellsville High School graduate and will be graduating from Allen this May. In reflecting on the game with KCCC, she said. “That game was definitely one of the best games I’ve thrown all season. I had a fire in me to pick myself up from the day before with our loss to Labette. I just went out and did what I know best. I had to prove to my teammates I wanted this win as bad as they did. We all worked together so well and kept fighting to the end. It was a GREAT team win.

“The same fire has carried over in our last couple games and even allowed us to rule Highland, who is 12th in the nation! The season is coming to a close faster than we can imagine. After we face Ottawa JV we will be set with our first round of regionals,” she continued. “I have no doubts that with this momentum we can take down whoever we face in the first round. The fight and drive we lacked in the beginning is now starting to show.”

Chelsea Lake and Sarah Eckart supported Beckley on the offensive side driving in the two runs against KCK that put Allen over the top.