Allen To Sport Under Armour 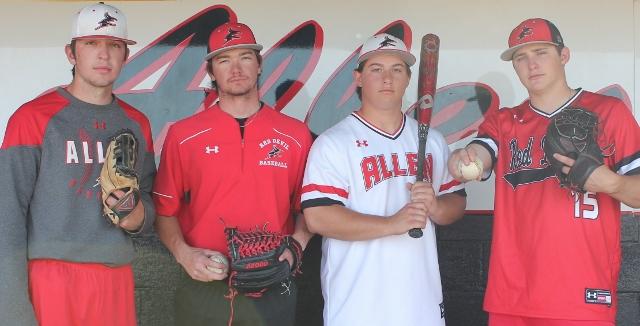 Doug Desmarteau has been an Allen Community College soccer coach for the past 10 years and in July 2015 was named athletic director. Desmarteau had noticed over the years as a coach that each team has its own representative for gear to supply jerseys and apparel.

One of the first things he wanted to do as the new athletic director was to bring some unity among the whole athletic department whether it be all the athletic programs using the same representative or all agreeing on a single brand to use.

The whole process took about three months, but after feedback from coaches and listening to multiple deals with representatives, Desmarteau decided that a deal with Under Armour through Sports Locker Team Sales offered the best “bang for its buck.” Beginning with the 2016-17 academic year, all Allen sports team will wear Under Armour.

Desmarteau had considered offers with other brands such as Nike and Adidas, but in his words, “Under Amour was above and beyond the other two.”

Some of the top reasons why Under Armour was considered were because of their great customer service and ability to raise money for out-of-state scholarships, with each program receiving $4,000 up front to spend on gear and receiving 10 percent back on team purchases.

The new deal also offers an online store through Sports Locker for anyone to purchase apparel. This is something that wasn’t possible before and gives families and friends who live out of state the opportunity to support their favorite Red Devil team. Beginning soon, a link to Sports Locker will be available on the Allen website.

Overall, Desmarteau is extremely happy with the new deal. “Under Armour is a popular up and coming company that is willing to do more for small schools,” said Desmarteau.

It provides unity within the athletic department through a single rep and brand, which is something that is not very common among smaller schools. Allen’s athletic facilities will also get some upgrades with banners, giving them a more professional look.

The main accomplishment walking away from the deal was that at the end of the day the coaches had a rep that they were all comfortable with and that the deal benefited every athletic program, Desmarteau added.