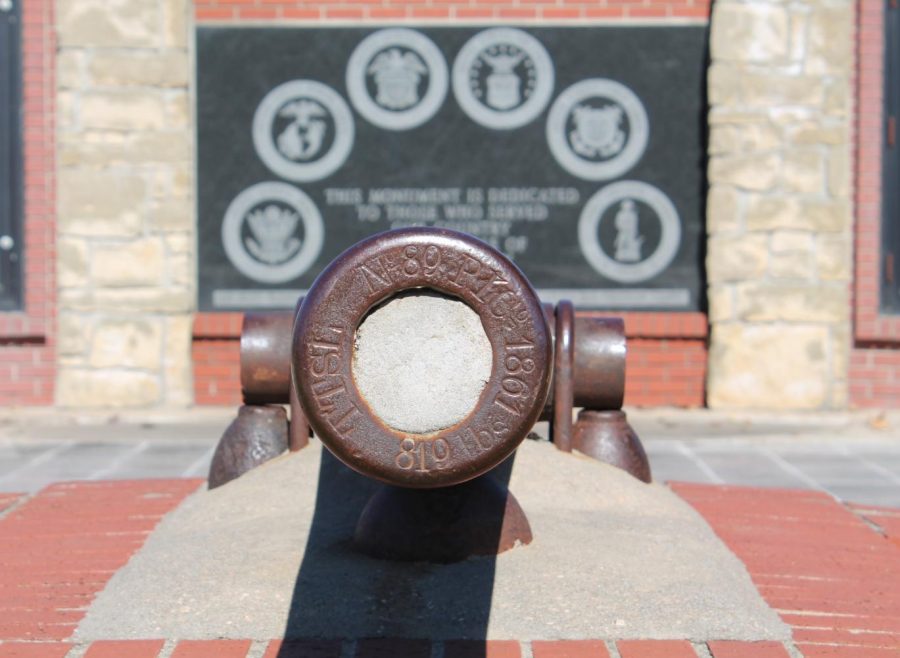 The Downtown Iola, Kan. square is advertised as the largest town square in the country. It includes the courthouse, the clock tower from the 1904 courthouse, a nationally registered bandstand, and the Veterans Memorial Wall; just to name a few. Many local businesses surround this local hub, that will soon be gaining a new addition, a Veteran Memorial Garden. The project is scheduled to break ground this month and will be completed by Veteran’s Day.

Two years ago, Alana Kinzle had the idea to create a garden around the Memorial Wall. After communicating with the county and local businesses and gathering donations, the plans for the garden were drawn up.

“Support from the community has been phenomenal since the project began,” Kinzle said. According to Kinzle, the county commission even went so far as to match the funds raised through donations.

TLC Garden Center of La Harpe, Kan. is doing the landscaping and Feuerborn Family Funeral Service is making the podiums featured in the garden. These podiums will have have information about each war the veterans’ served in.

The city has already laid water lines for irrigating the plants. The garden itself will wrap around the back side of the wall and extend north. A rock fountain will be in the center of the garden.

The Memorial Wall was erected in the mid 1990s to recognize those who served in the armed forces. The wall includes veterans from the Civil War to the present day. Those wishing to honor a veteran who lives in Allen County can donate $15 and fill out a form at the Allen County Historical Society to get their name on the wall.

IOLA CLAIMS to have the largest city square in the country. When asked about this, Kurt Russell, the director of the Historical Society, replied jokingly, “I don’t know. No one’s ever called us out on it.”

Russell stated he did not know officially whether it was the biggest square or not. The claim is great advertisement, and it attracts people to the Allen County Historical Society Museum and to the accompanying Gen. Frederick Funston Boyhood Home and Museum.

However, the town square is in fact two blocks wide and two blocks long, with no roads cutting in between. This cannot be said of any other town or city across the United States. The Iola square is indeed the largest in the country.

The square has always been a part of the town, though before 1904 there were few businesses on it. Trees were cleared to build the third courthouse of Allen County, the second being converted into the building that today, is home to retail shop Sophisticated Rose.  The third courthouse was opened in 1905, complete with a clock tower.

That same year, Charley Melvin, more popularly known as the Mad Bomber, bombed three saloons with dynamite in the name of prohibition. The concussive blast shattered many windows in the new courthouse and stopped the clock tower at 12:26 a.m.

Russell said the 1904 courthouse was a stunning building, but that it was eventually torn down for structural reasons. The only thing left from the clock tower was its faces and bell. The clock now stands near the Memorial Wall and chimes every hour – including midnight! However, the clock only has one of the four faces from the 1904 courthouse clock tower. The second is in the Historical Society’s collection; the remaining two were presumed sold to private buyers, and their location is unknown.

The town square is a calm environment, with many benches to sit and relax. The addition of the Memorial Garden will add another layer of beauty to the square as well as another chapter in its history.