Allen Farm To Be Sold 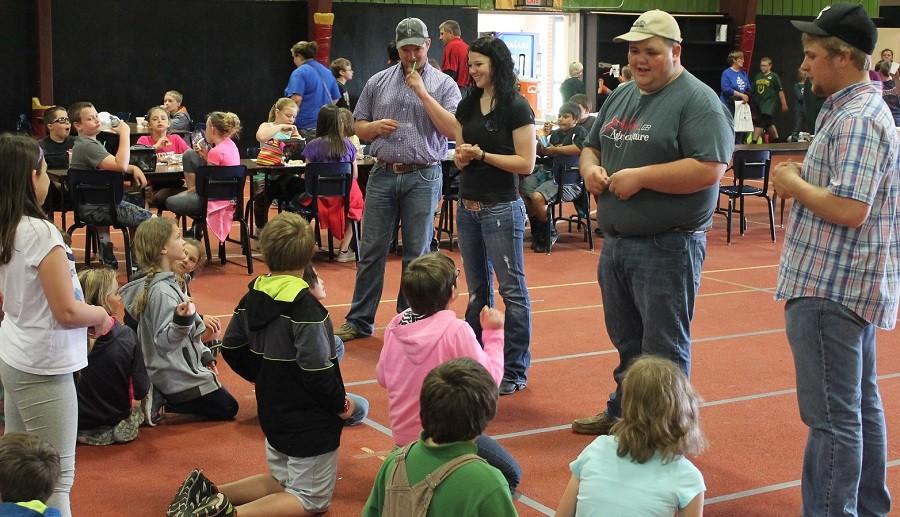 Allen agriculture students Tyler Pedersen, from left, Karl Riffel, Leah Scholz, and Dakota Ferguson speak to are elementary school students during the recent Day at the Farm. The event was held in the activities building due to inclement weather, but about 150 youths from Iola and Humboldt attended.

First purchased in 1979, the Allen County Community College farm has been used by the agriculture program to supplement on-campus courses and for students to gain hands-on experience.

The farm also houses eight agriculture students who have been selected to live in the Zahn Scholarship House. The students live there full time and gain real-life farm management experience. They are responsible for taking care of the farm and its livestock.

Allen’s Board of Trustees voted at January’s board meeting to sell the college’s farm. The decision to sell the farm has been debated over the past several years with the main concern from administration having been the cost of developing and maintaining the farm and its land.

In past years the college’s administrators have worked alongside the school’s agriculture instructors, as well as members of the Iola agricultural community, to try to develop ways in which the college’s farm could be properly managed and most useful to Allen’s agriculture program.

President John Masterson explained that the main idea behind purchasing the farm in 1979 was to develop a living laboratory in which students in the agriculture program could learn through hands-on experience.

However, Masterson noted that over the years it has been difficult to hire a consistent farm manager and the farm was never integrated into the academic program as it was originally intended to be.

The loss of the farm is definitely heartbreaking to everyone involved in the agriculture program. For many students the farm is one of the main attractions that led them to Allen County when they were searching for schools.

Bailey Corwine, a freshman agriculture major at Allen, attested to that by explaining that the farm is a unique thing that many other schools cannot offer to their students.

“Many of the ag students, myself included, chose Allen because of the farm and the hands-on experience it had to offer,” Corwine stated.

Terry Powelson, an agriculture instructor at Allen, expressed his concerns about selling the farm. He explained, ­­­“Selling the farm will hurt our enrollment in the short term. … It was a great tool when recruiting students to our program, but the hardest part is to find a way to fill that portion of our program which was the laboratory setting at the farm.”

Although the college’s administration has decided to sell the farm it is not abandoning the ag program. “Enrollment in our ag program is the highest it’s been in the past 10 years through the online courses Allen offers,” stated Masterson.

There are plans to hire a new ag instructor, who will be an agriculture career specialist and the new livestock judging coach. Administration hopes to bring in someone with connections to the local area that will help recruit students to Allen’s ag program and develop internships for students wanting hands-on experience working in the agriculture field.

The college plans to sell the farm sometime late this summer before classes resume next year.