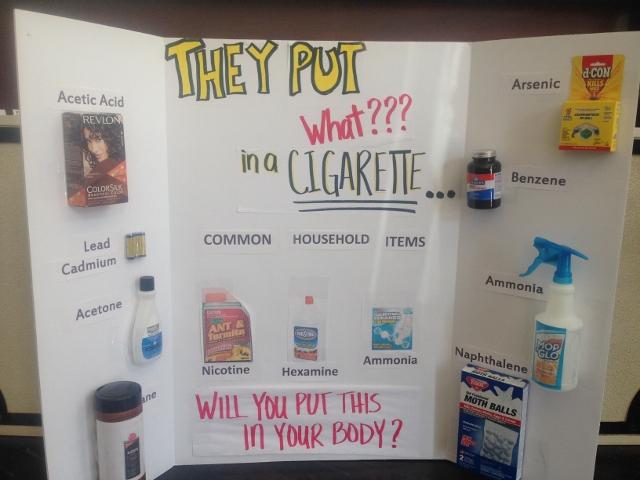 This poster made by local middle school students campaigns against tobacco and is in the Iola office of Bobbi Bonds, Community Health Educator for Thrive Allen County.

Many exciting things happen when teenagers turn the magical number of 18. Along with getting to tell people you’re 18 comes more freedom, less restrictions, and a whole lot of responsibility we aren’t ready for.

Something else that turning 18 includes is the legal buying and using of tobacco. Although tobacco products are restricted in many locations and areas, like school, what happens after the bell rings is up to the student. Whether it be smokeless tobacco, cigarettes, or E-cigs (electronic cigarettes), they are legal in the hands of an eighteen-year-old. That is all about to change, at least locally, with the Tobacco 21 Ordinance.

Tobacco 21 started in Kansas City to prevent young adults from addiction and the dangers of tobacco products. The ordinance, when passed, changes the legal age to buy tobacco from 18 to 21. It will still be legal to possess and use the substance at those ages, however. Iola has already passed this ordinance, and it will take effect summer 2016.

Here at Allen Community College, this can and will greatly affect many students. The smokeless tobacco percentage in Allen County alone is three times higher than the state of Kansas, according to statistics.

Tobacco products are commonly used among adults. One in five adults, starting at age 18, smoke, while nine out of ten smokers start before the age of 18. The human brain is still developing until the age of 25. This means that we have a bunch of under-developed brains making decisions that they aren’t ready to make.

All this trouble and fuss about tobacco products comes from one thing; nicotine. Like heroin or cocaine, nicotine changes the way the brain works and causes one to crave more and more nicotine. This addiction to nicotine is what makes it so difficult to quit smoking and using other tobacco. The idea behind Tobacco 21 is that by making the age three years older, the eighteen-year-olds buying and sharing with minors will not be exposing those minors to the dangers of nicotine, and thus, they will have less of a chance of getting addicted to the deadly drug.

Tobacco 21 has been passed in Iola, but what about the rest of Allen County? Humboldt, seven miles south of Iola, will have its voting meeting in May. Gas City, just a couple of miles to the east, said no very quickly to the initiative.

Bobbi Bonds, Community Health Educator for Thrive Allen County, spoke on the issue. “… The biggest factor for us is to keep educating those who lack understanding of what this is all about. This initiative is about giving back (health and longer lives), not taking away,” she said.

Tobacco is the leading cause of preventable death in the United States. Lung cancer, mouth cancer, throat cancer, COPD (chronic obstructive pulmonary disease), and diabetes are only a few of the diseases that smoking and using tobacco can cause. Cigarettes are the only legal consumer product that when used as intended, kill half of regular users. That’s a statistic that needs some attention.