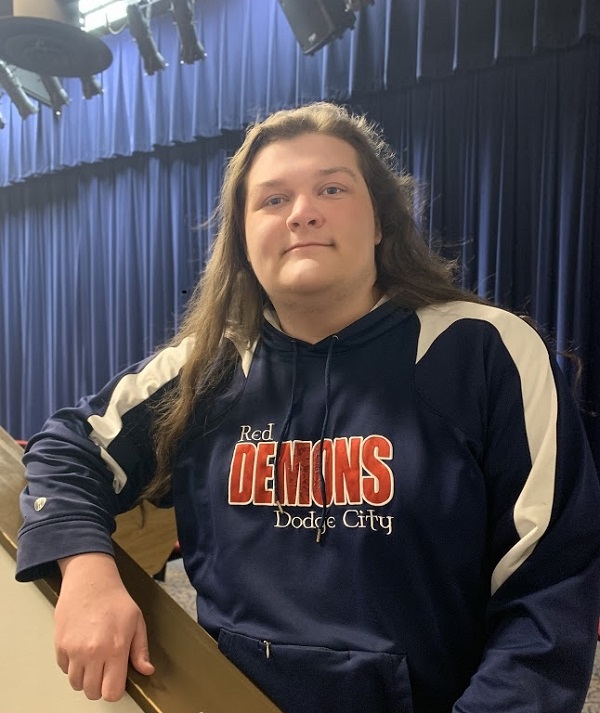 Jake Andersen is at home in the Allen Theatre.

Jake Andersen, Iola, is a freshman and recipient of a theatre scholarship at Allen Community College. He is currently working toward a major in biological sciences. He’s not 100 percent sure what he wants to do after Allen; however, he does know that he wants to do something with his college education.

Through Andersen’s scholarship, he stays busy in the theatre department.

“It’s very thorough,” he said. “There is a lot going on at any given moment.”

Andersen has been a part of multiple plays during the school year.

“Performing on stage is very nerve-racking,” he admitted, but again the comfort level increases with each performance.

Andersen said he would recommend the theatre program to others

“There is really a spot for everyone,” he said. “You don’t even have to be up on the stage to be part of the theatre program. There are technical jobs that are good experiences too.”

On top of that there are many potential scholarship opportunities for the Allen theatre program.

“It is not taxing work if you enjoy it, but obviously you’ll have your work cut out for you,” he added.

Outside of his general studies and acting, Andersen enjoys tabletop games, and he and others have formed a group of individuals who all enjoy doing the same. He stated that before the group had formed he would oftentimes go home after class and be bored. They often meet in the study rooms throughout the day and are open to anyone joining!