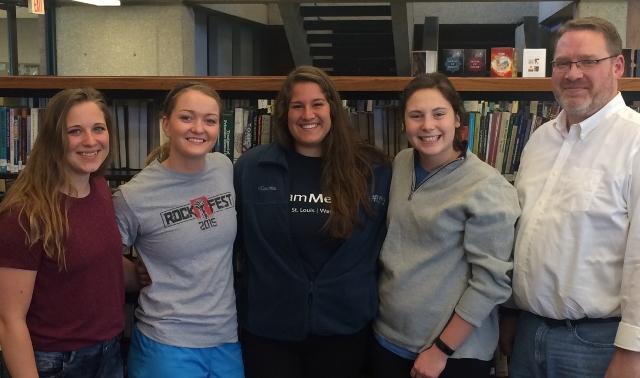 Allen Community College offers an assortment of ways to be involved and part of a team. One of the activities on campus that has a few students buzzing is our Academic Excellence Challenge (AEC) team. The Academic Challenge team competes against other community colleges including Neosho, Coffeyville, Johnson and Cowley. Throughout the year there are five AEC competitions, one of which Allen hosted. This past weekend, Allen went 1-6 in the state meet at Kansas Wesleyan University in Salina. Although the results were not what the team was hoping they would be, there was a silver lining in that Carly Jackson placed seventh overall individually.

The competitions are set up as a round robin tournament. Two teams compete with each other; each team gets their own table, and each team member gets his or her own buzzer. The rounds consist of 24 questions that could be from math, sciences, social behavior, fine arts, government, economy, history and current events. Each question is worth 10 points and contain 3 bonus questions that are also 10 points each. The team members are allowed to communicate with each other before answering but only one is allowed to use the buzzer and answer.

This year the team members were Jackson, Madi McGuire, Mary Hobbs and Leah Hiebert. For Jackson, McGuire, and Hobbs it was their second year with the Academic Excellence Challenge team. Although there were only four members on this year’s team, there is not a limit to the number of students that can be involved. If there are enough students, there can be multiple teams from the school.

For the past 15 years Todd Francis, chemistry instructor at Allen, has been in charge of the Academic Excellence Challenge program. Francis said he hopes students involved get a sense of comradery from working together and against other students and that they have an enjoyable experience.

If looking to get involved or finding out more about the Academic Excellence Challenge, team practices are usually held on Wednesday afternoons in room A33. There are also scholarship opportunities which cover the cost of books and tuition.